How do you maximize your training during an ammunition shortage? Dry fire. The end. Stop reading. You know everything now.

Yes, John and I know that dry fire should be the cornerstone of your training whether there is an ammunition shortage or not. The thing is – telling you to dry fire makes for a short read, a really lame video, and is about as helpful as telling someone who wants to run a 5 minute mile to just run faster.

So, let’s assume you’ve put in all your dry fire work and you were doing some laundry. You checked your pants pockets prior to washing, and discovered gold in the form of 50 rounds of pistol ammunition. Let’s also assume that instead of hoarding your newfound wealth, you’re going to hit the range and get in some solid training. How to do it with 50 rounds? Glad you asked.

One way to maximize training efficiency is to incorporate as many skills into a single drill as possible. John and I took two different approaches to our drills but both managed to build in several skills. 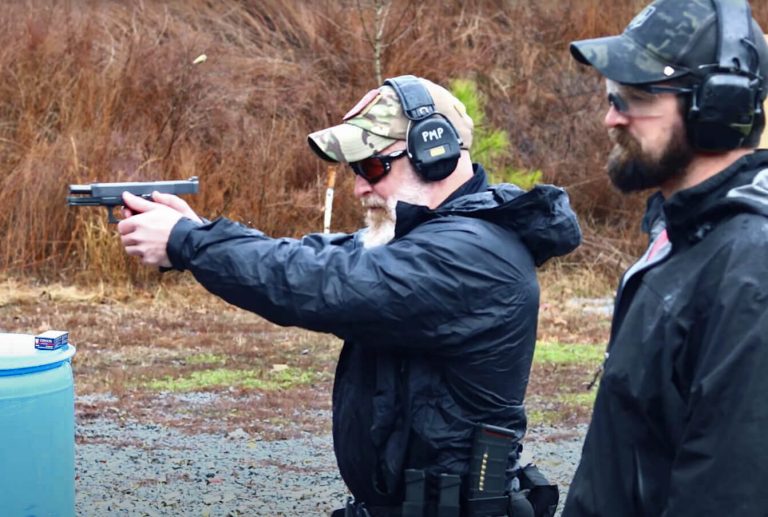 For my pistol drill, I chose a 1-reload-1 drill. This is a skills/mechanics based drill and it does have some limitations (as do all drills) that I will discuss later. Your pistol is staged with one round in the chamber, an empty magazine in the gun, and you have a full or partially full magazine in your mag carrier to reload with. I like to train with a shooting timer so that I have a metric by which to measure progress from session to session, but it’s not a requirement.

When ready or on command from a partner, the shooter will draw, fire one round (the slide should lock to the rear on an empty magazine), execute an emergency reload, and reengage the target with one additional round.

In order to set the drill up again, the shooter will kneel to retrieve the empty magazine, execute a tactical reload (normally used to top off the gun with a full magazine in between duels) with the empty magazine, then stand and holster.  In a 2-round drill, you have worked your draw, fundamentals of marksmanship, emergency reload, positional changes, muzzle awareness, and a tactical reload.

Drawing on the drawbacks

There are multiple points of contention on this drill that I’d like to address. One is that you are drawing, firing one round, and immediately reloading – which does not simulate reality for those of us who carry more than one round in their firearm. It also doesn’t simulate reality that I shot this drill on video standing on a flat range, out in the open, shooting a 3-foot tall Raven target. I have never seen or heard of a Raven target committing a crime that justified the use of deadly force against it. Sorry to tell everyone, but every trip to the range isn’t going to be a simulated gunfight. At some point, you have to break everything down into its component parts. Then, work those skills individually until you have imbedded a functional skillset that you can access unconsciously, under stress, so that conscious thought is freed up to make tactical decisions.

Another issue is that the drill doesn’t effectively test your grip on the pistol as only one round is fired and recoil mitigation isn’t much of a factor. It’s easy to get sloppy with your grip when you only have to fire one round, so be honest with your assessment of individual performance. If you cheat your grip, it’s not the drill’s fault, it’s yours.

Some also suggest that you can randomize the drill by firing more than one round so you do not anticipate the reload. First, the idea is to help you get the most out of your live-fire training with only a limited round count – so you only fire one round. Second, in order to get an accurate measure of progress, you have to conduct repetitions and collect data under controlled conditions that are the same every time. This is a key difference between training and exercising.  Training involves setting goals and measuring progress; exercising is just doing stuff.

Drilling for an ambush

John took a different approach to maximize his training efficiency.  His first drill simulates an assault from behind where the shooter starts about 3 feet from the target, facing away from it. On command or when ready, the shooter will turn, draw, move diagonally away from the target, and engage with one round to the head. 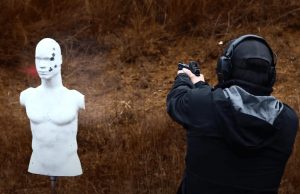 Because this drill is supposed to simulate an attack from the rear, John wears his EDC gun and draws from concealment.  With a single round drill, you have now worked a pivot/turn, movement (retreating from the target in this case), drawing from concealment, and solid fundamentals with a well-placed headshot.

Because of introduction of movement and drawing from concealment, it is highly recommended that you have trained enough basic skills to be able to safely conduct this drill live-fire.  Some will take issue with only firing one round.  John and I understand your concerns about being able to assess the accuracy and effectiveness of your shots while being able to place fight stopping follow-up shots as quickly as possible.  Remember, this is live-fire training with only 50 rounds and we’re trying to cram in as many repetitions as possible with limited ammunition.

Breaking out the heart monitor

For John’s second drill, he emphasizes the need to train fundamentals of marksmanship with an elevated heart rate.  With no small amount of joy, I got to make him do some burpees in the mud while ridiculing him. When I felt he’d had enough, I gave him the command to draw and engage a Raven target with one round. For the purposes of this drill, John would reengage if he missed.  Yes, *limited ammo*, but for purposes of training fundamentals and precision engagements at distance (40 yards), it can be beneficial to self-assess and correct shooter error immediately in order to finish the drill with positive feedback.

In order to set this drill up, you can move back to the 40 yard line as mentioned.  Obviously, the drill is scalable based on your individual skillset.  Make the distance and target size challenging to your ability as a shooter.

The shooter starts with the gun loaded and holstered.  On command or when ready, the shooter will perform some sort of calisthenics-based exercise (burpees in our case), cease exercising, establish a good shooting stance, draw and fire one round (or more if required in order to register a hit).  With a single repetition, the shooter is able to train their draw from concealment, positional changes, and fundamentals of marksmanship while introducing an elevated heart rate.

Test your limits – and know them too 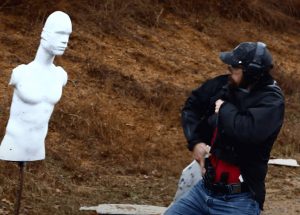 Learning what you’re capable of under physical stress should be a key component to your training; it is imperative that you know how an elevated heart rate will affect your abilities as a shooter.  One key consideration is first testing the retention of your holster during dynamic movement.  You don’t want to be knocking about burpees and accidentally dump your blaster in the mud.  Always check your gear prior to going live on the range.

Even with a limited amount of ammunition, if you’re doing more than just turning money into noise on the range, you can get a lot accomplished.  Give some of these drills a try.  Whether it’s a mechanics-based drill like 1-reload-1 to conduct specific skill training or something more closely resembling a fight with added movement and elevated heart rate, you can make every round count and maximize your training time on the range before you go back to your boring but highly necessary dry fire training back at the house.

The Henry Steel Lever Action .45-70 Side Gate rifle is not normally the kind of weapon we turn to…
Read More