There’s a lot of professional opinions out there about how best to train, present and shoot your pistol in a tactical scenario. A lot of these opinions come from reputable sources, but some fall into the category of crap advice. Maybe you’ve fallen victim to some of these words of well-meaning non-wisdom, so we’re here to set you back on the straight and narrow and help you avoid three terrible pieces of shooting advice.

Bad Advice #1: Aim Up and Right

Most folks are right-handed shooters, which means most people unintentionally shoot down and left. (And obviously most left-handed people shoot down and right.) There’s a lot that can cause this tendency among novice shooters.

Some people blame the gun of course.

“Hey. This gun is shooting down and left.” This is a running joke among gun instructors who like to have a hearty laugh about guns that miss targets. In reality, it’s so rarely the gun’s fault that this explanation is usually at the bottom of a very long list of possibilities for why your bullet won’t hit where you’re aiming.

The problem is usually user error, but the solution should never be bad training.


Unfortunately, instead of correcting form and technique with a qualified instructor, novice shooters will try a number of bad solutions. They’ll adjust their sights to correct for the problem (sometimes with encouragement of an “experienced” shooter. Or even worse: They’ll offer the egregious solution to “aim up and right.”

Maybe aiming up and right will help you hit a target a little more consistently in the short term, but it won’t make you a better shooter when it really matters. Instead, it’ll hardwire bad habits into your neural pathways and weaken your tactical abilities.

To use a golf analogy, do you think Tiger Woods corrected a slice by aiming his driver toward the trees? Likely not.

So if you want to be a good shooter, fix your fundamentals with good instruction. Don’t fudge on your fundamentals. KEEP FROM AIMING UP AND RIGHT. DON’T DO IT. Instead, learn how to aim and fire properly.

For two-handed shooting, some instructors encourage students to switch hands when shooting around an obstacle such as a door or car. But all this accomplishes (using a baseball analogy) is making a right-handed pitcher throw left-handed. While you could probably do this with enough training, it really offers no practical, tactical advantage. Instead it’s just an awkward and worthless bit of folk wisdom that reduces speed and consistency. 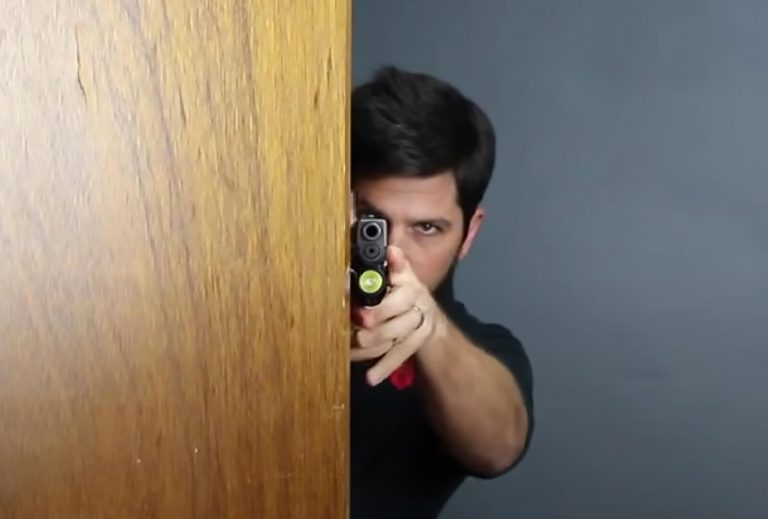 here are, of course, times when you need to shoot one-handed left or one-handed right, but two-handed shooting should implement a well-trained normal pistol grip that’s been optimized for balance, consistency and speed. As avoiding obstacles becomes a normal part of your training routines, I promise your balance and proficient two-handed grip will not get in the way.

DON’T SWITCH HANDS ON DOUBLE GRIP. REFRAIN FROM IT. Instead, learn and train proper stance, grip and shooting through good tactical instruction.

We need to be careful with criticizing this third piece of terrible shooting advice because it comes from a good place. It’s advice offered in an attempt to increase speed during a violent encounter. It’s true that 96 percent of all violent encounters happen within distances of seven yards, and the majority take place within three yards.

This means you have practically zero milliseconds to lose in your response. So I get it. But point shooting is not the answer.

When you try to increase speed by promoting and training bad form and ignoring your sights, you end up with bad form, decreased accuracy and an undisciplined, less effective reaction to threats. Fast but ineffective is NOT the way to go in a tactical scenario. This highlights the universal truth that all bad advice tries to circumvent–there are no shortcuts around good instruction and consistent training for learning how to use a firearm. If you practice point shooting, you’re always going to have a little bit of slop in your presentation.

So even though we’re very aware of how quickly things happen in life-or-death situations, we still focus most of our training to hardwire good sight alignment, sight picture, meticulous hard focus on your front sights.

Training for good sight alignment makes you a more versatile, disciplined and accurate shooter in all scenarios. It even makes you a better point shooter. In a situation where there’s no time to align your sights, your non-sighted shooting will be more precise than the shooter who trains without sights.

To reiterate–the way we get to be good point shooters is to train with good sight alignment because you’re training your body to constantly have this precise, brilliant, very meticulous alignment. You’re carving deep neurological pathways for your body to consistently sync up with your sight alignment and picture so that you can throw a gun out in perfect alignment in a split second. With perfect, consistent alignment, you’ve got a significant advantage of perfect body indexing and alignment when you’re forced to fire without sights.

So–DON’T IGNORE YOUR SIGHTS. JUST DON’T. Instead, the best way to get really good at point shooting in those real close-up encounters is NOT by practicing point shooting. Instead, you need to get good instruction and work hard to get meticulous with good form and sight alignment at the range.

And all of this, of course, is why we always encourage people to Train Hard and Train Smart.

For more on tactics, preparedness, and warrior mindset – check out the Warrior Poet Society Field Guide and the WPS YouTube channel.