Nothing quite says “I own you punk” like putting a laser on someone’s chest. I’ve heavily used infrared lasers (IR) lasers on rifles with night vision, but putting lasers on handguns has a few unique challenges. Scroll down to check out a list of PROs and CONs, product links, and a VIDEO i made on this subject.

As a word of caution, not all handgun lasers are created equal, and there are major design differences. There are three main ways to put a laser on a handgun: (1) mounted to or in front of the trigger guard like the Streamlight TLR-8 seen above, (2) replace or mount on the backstrap like the Crimson Trace laser seen below on the Smith and Wesson M&P, or (3) guide rod lasers like the ones by LaserMax. 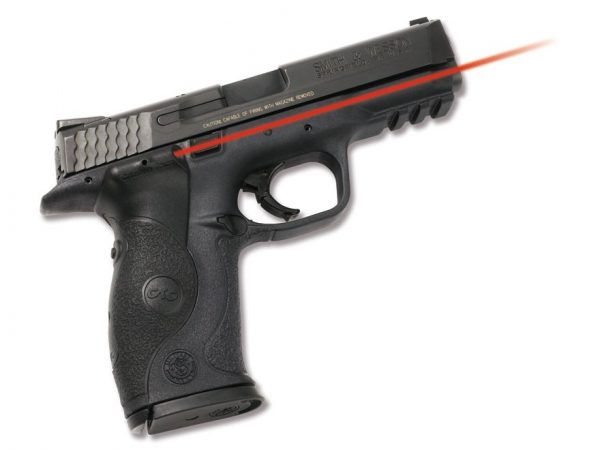 Now for the ‘what should I get’ recommendations, which I’ll warn you are nuanced and hamstrung by my own limited experience. For example, I have not sufficiently tested guide rod lasers like the ones by LaserMax.

I really LIKE the Crimson Trace lasers that replace the backstrap on the M&P pictured above, while I DO NOT LIKE those that wrap around the backstrap of the Glock (my torqued-down grip can shift the zero and the laser adds bulk to the backstrap I dislike).

If you have a Glock, or like pistol, I’d currently steer you towards the Streamlight TLR-8 because it incorporates a powerful 500 lumen light. The laser is an easy add-on, has been reliable thus far, and seems to hold zero well-enough (this is a new laser so I cannot give more confidence until it has passed the test of time).

As for the small laser/light combos I see on smaller guns like the Streamlight TLR-6 for the Glock 43 — I think the light output is not bright enough to blind an attacker and so it becomes a ‘hey, shoot me’ light, but the laser used alone could still serve you well.